Karen Gaffney is the first woman in the world with Down syndrome that has been awarded a doctorate degree.

Karen Gaffney was born in 1977.
In 2001 she graduated from the Portland Community College.
She works as the president of the Karen Gaffney Foundation.
This foundation funds projects that support people with a disability.
Karen Gaffney is a public speaker and she gives lectures in many countries around the world.

Tom Greene is the Provost for the University of Portland.
In his speech about Karen Gaffney he said:

"She is a young woman who refused to be told what she could and could not do. In every arena. From the classroom, to the English Channel.
No one has shown so bravely, and inarguably, that any cultural bias against Down syndrome is wrong, and unjust.
With deep admiration for her flinty willpower, with reverence for her adamant courage, the University of Portland humbly awards Doctor of humane letters honoris causa to Karen Gaffney of Portland Oregon."

Karen Gaffney is also a very successful sports woman.
She is a swimmer.
For 5 days a week she swims more than 3 kilometres each day.
She is the first woman with Down syndrome to swim across the English Channel.
She has won 2 Gold Medals at the Special Olympics.

Karen Gaffney wants to show what people with Down syndrome can achieve.
She says:

"I want to give children and families hope.
I want to help people without Down syndrome understand that we are more alike than we are different." 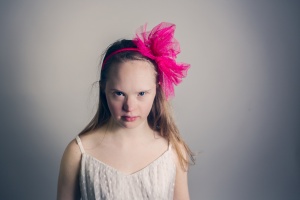 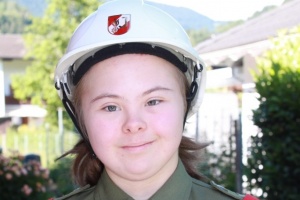 Portrait of Karen Gaffney at Leidmedien